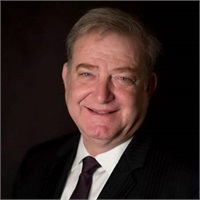 Joe is a Registered Representative of Founders Financial Securities and has been licensed in Life/Health insurance since 1983. Later acquiring licenses in Series 6, 63 & 26 and is registered with FINRA. Originally being affiliated with New York Life, he and his father-in-law formed Milt Folds & Associates. Upon Milt's retirement, Joe formed Joe Cochran Agency, Inc., later attaining his license in Long Term Care and Indiana Partnership Long Term Care Programs. Recently Summit Legacy Group was formed. The SLG division is the investment partition of JCA.

Joe is active at his church, Most Precious Blood and belongs to the knights of Columbus Council 11043. His pastimes are the outdoors, including fishing, hunting, and gardening.  His past community involvement include Crime Stoppers of Whitley County Indiana, and Junior Achievement of Northern Indiana specifically serving Whitley County.

He and his wife, Dot, are the proud parents of eight children and seven grandchildren.